Cold, mud and rubble: after the glacier collapsed in northern India, the number of deaths rose to 26. Several people are still missing, including dozens of workers trapped in a hydropower plant.

At least 26 people were killed in northern India’s flash flood caused by a glacier break north of India. More than 160 were injured. At least 170 other people are still missing, the authorities announced. Most of the missing persons were reportedly workers in two power plants.

In a first balance sheet on Sunday, the authorities announced that three people had been recovered dead. The number of missing people was originally estimated at around 200. Fifteen people could have been saved.

Environmentalists have claimed that climate change led to the burst of a part of the Nanda Devi glacier at Joshimath in Chamoli district of Uttarakhand on Sunday (February 8). 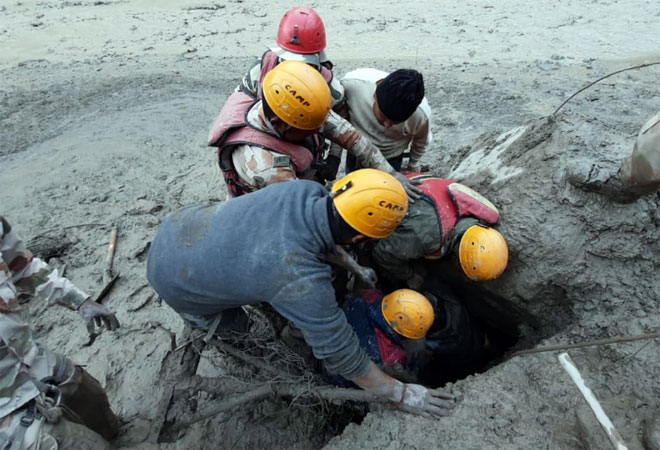 Everything was washed away.

Part of the glacier had rushed into a dam over the weekend and triggered an avalanche of rubble and water that fell downstream. The accident occurred at a good 2000 meters above sea level in the northern Indian state of Uttarakhand.

Authorities said that several bridges were torn away and roads were damaged. “Everything was washed away, people, cattle and trees,” said an eyewitness from the nearby village of Raini. Since the entire glacier moves downstream, people in lower-lying villages have been brought to safety.

Two power plants were also buried under the floods and rock masses. Dozens of workers are still trapped here – at least 34 according to the authorities. The rescue workers are concentrating on a 2.5 km long tunnel, in which the workers of hydropower plants are presumably trapped. There is still no voice contact with the victims, said a police officer.

The rugged terrain, the cold and the mud are a great challenge for the rescue workers. The tunnel was full of debris carried away by the river, said a senior paramilitary border police officer. These must be cleared away with machines.

According to the AP news agency, twelve workers were rescued on Sunday. One of those rescued, Rakesh Bhatt, reported that he had worked in the tunnel and initially believed that the water that had seeped in came from a downpour. “But when we saw the mud and debris coming in at a great pace, we realized there was something bigger going on,” he said. They would have raised the alarm via a mobile phone. “We waited almost six hours – praying to God and cracking jokes with each other to keep our spirits up,” said Bhatt. He was the first to be taken out and was very relieved.

There are always accidents in the hilly landscape. In the hefty monsoon rain in 2013, more than 6,000 people died.