At least 150 people are missing in northern India after a massive flash flood. Hundreds of rescue workers are on duty. A glacier had previously broken off a mountain in the Himalayas and fell into a river.

In the northern Indian state of Uttarkhand, the rescue workers are on a large scale. After a glacier in the Himalayas broke off, a huge tidal wave was triggered in the Dhauliganga, a Ganges tributary. 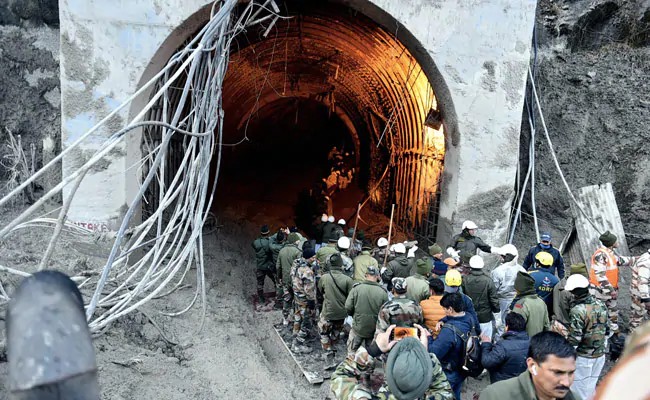 According to media reports, up to 150 employees of the power plant are missing.

Residents and emergency services from the region are responsible for the villages’ evacuation along the raging river, as was shown on footage from the Reuters news agency.

Hundreds of Rescue Workers on Duty

Hundreds of rescue workers from New Delhi have already been flown into the high mountain region, said India’s Interior Minister Amít Shah. More are on the way; he told a reporter for the ANI news agency. The government of Prime Minister Narendra Modi will give the affected region in Uttarkhand every possible help.

Many towns along the river need to be evacuated. The falling water masses on the upper reaches of the Dhauliganga are likely to lead to further landslides and floods further down, at the foot of the Himalayas. The residents of Rishikesh and Haridwar, among others, were warned of the effects of the glacier break-off.

The Dhauliganga, which rises on the Raikana glacier at an altitude of 4700 meters, is a tributary of the Alaknanda, the Ganges’ left source river.

According to Indian media reports, part of a glacier broke off near Joshimath – a small mountain town that lives from mountain tourism – and damaged the Rishiganga Power Project’s nearby dam. It is still unclear why the glacier collapsed.

Researchers have been warning of glacial melt for years.

Scientists have been warning of the effects of climate change for years. Suppose the rise in CO2 emissions and the associated rise in global warming are not stopped. In that case, the glaciers in the Himalayas could largely have disappeared by the end of the century, according to a study by the International Center for Mountain Development in Kathmandu published almost two years ago.

The authors determined that the ice fields on Mount Everest and K2, the second-highest mountain globally, would be visible as bare rock. Even in the best case, i.e. limiting the temperature rise to 1.5 degrees – as determined by the IPCC – a third of the so-called eternal ice would have melted by then.

According to a study by Columbia University in Washington, the glaciers on the “roof of the world”. With the highest mountains, are already melting twice as fast as before the turn of the century.

IRCTC 'Indian Railways’ Sends 3200 Food Meal Packets To Flood-Hit Assa...
The Downfall of Parle: It May Lay off 10,000 Employees
Curfew Continued for the Ninth Day in Kashmir
Fatehveer Singh, 2-year-old Boy Pulled From Borewell, Declared Dead
What Everyone Ought To Know About Black Fungus Spreading Rapidly in In...
Punjab: Massive Operation on to Rescue 2-year-old Fatehveer Singh From...
Tags:Featured · Himalayas · Uttarakhand · Uttarakhand Glacier Burst