Assembly elections scheduled to be held in Goa in single phase on 4 February 2017 BJP, Congress and the ANM Aadmi Party began feverishly campaigning in the state. The ruling party BJP seems sure to retain power in the state. For the first time AAM Aadmi Party challenge to the state.

According to a survey conducted VDPA Associates, A BJP will get majority in the elections following the Goa Assembly. The second can be either Congress or the AAM Aadmi Party. Poll Results India Today-Axis has shown that if the elections were to be held today in Goa, the BJP will emerge victorious. Intelligence study voter Kautilya, on the other hand, says that the AAP will be the largest party in the state.

In a survey basis, held in Goa in late December 2016 survey of India Today-Axis predicted that BJP will get 20 to 24 seats in the state legislature of 40 members while the Congress may bag 13 to 15 seats, Aam Aadmi Party, who worked long and troubled campaign in the coastal state can register their presence by winning 2-4 places. 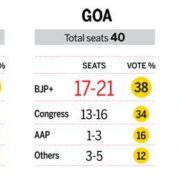 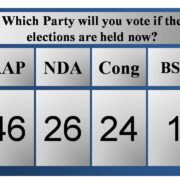