The morbidity and mortality from black fungus in India is reported to be steadily increasing. Medical experts call it “a pandemic within the Covid-19 pandemic.”

What is Black Fungus? 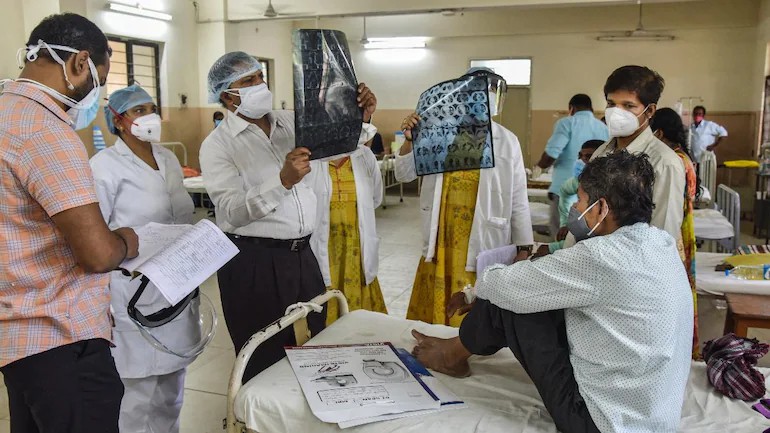 Black fungus or mucormycosis is a complication caused by a fungal infection. It is a relatively rare but potentially fatal condition.

The Centre asked states to declare it a notifiable disease. It is also taking action to address the shortage of Amphotericin B, a drug needed to treat this condition.

Here’s what else we know about this new health scourge:

How Does One Catch Black Fungus?

This infection is transmitted mainly by fungal spores floating in the environment. It can also become infected when the fungus “enters the skin through cuts, burns, or other damage to the skin.”

On contact, the fungus can adhere to a part of the body, and after ingestion through the nose, sinus or lungs.

If the fungus passes through a cut or burn, it can cause local infections. But if it enters through the sinuses, it can affect the eyes and ultimately the brain, leading to a fatal situation.

Some doctors believe the black fungus took root when medications were given to home Covid patients without blood sugar control. Some others say this has led to an blood sugar levels under. Some say that it, swamped immuno-suppressed systems owing to unclean, unhygienic post-Covid living conditions of patients.

According to the chief of AIIMS, Randeep Guleria, the pressure under doctors and panic worsen the situation.

“There’s sometimes a knee-jerk reaction among physicians, who choose aggressive medical treatments instead of being conservative,” he said.

The cases of mucormycosis is also increasing due to the excessive use of cheap steroids – this is observed in cases where it is necessary to control the hypertrophied inflammatory response of Covid. Steroids suppress the immune response, which can increase vulnerability to secondary infections such as black fungus.

The use of ordinary tap water in oxygen cylinder flow meters is also the cause of these fungal infections. Cases can be caused by “mold-tainted oxygen pipes and humidifiers.”

What are The Symptoms of Mucormycosis?

Some early signs of the condition include “sinus pain or nasal congestion on one side of the face, one-sided headache, swelling or tingling, toothache and loose teeth,” according to the Indian Council of Medical Research (ICMR).

According to reports from various leading hospitals in India, patients reported “blurred vision, discoloration or blackening of tissues in the nose and cheeks, and black lesions in the mouth or nasal discharge.”

Who Kind of People are More at Risk?

According to medical science, diabetic patients are highly vulnerable to fungal infections such as mucormycosis. Also immunocompromised people who have recently been cured of Covid.

Intensive care is required for Covid patients who also have diabetes. The ICMR claims that fighting diabetes is one of the best preventive measures.

According to the Union’s Ministry of Health, the disease occurs mainly in people who have recovered or are recovering from Covid.

If left untreated, it can lead to fatal blood poisoning.

How is Black Fungus Treated?

Once a person is infected, the fungus does not remain static, but spreads through the nose, infects the eyes and eventually reaches the brain, after which it becomes potentially fatal. This requires a multidisciplinary experience for treatment.

In most cases, especially if they are not detected for a long time, different parts will eventually respond to mucormycosis. Therefore, it calls for a combined team of microbiologists, therapists, intensive care neurologists, ENT specialists, ophthalmologists, dentists, surgeons, etc.

As part of life-saving procedures, all infected tissue must be surgically removed. Some patients eventually lose their eye(s) and, in some cases, the upper jaw.

How Rrisky is This Condition?

The fatality rate in mucormycosis is very high.

According to the data available at the moment, the mortality rate reaches 80% if the patient is left untreated or remains untreated for a long time. If treated, it is still 40-50%. In cases where the infection is found at the very stage of the sinus, patients usually recover completely.

Plus, according to doctors, the drugs used to treat this condition have strong side effects. In some cases, this can lead to “kidney problems, neurological dysfunction, and stroke.”

Doctors are currently using Liposomal Amphotericin B to treat black fungus infections. Up to 20 vials of this injection are needed to treat each infected person. According to reports, each bottle currently costs between Rs 5,000 and 6,000.

The availability of this drug is currently a concern as its supplies are controlled by the government. In its absence, some doctors say they switched to second-line drugs such as Posaconazole.

Self-medication is strictly no-no and black fungus medicines should only be taken with a doctor’s prescription, doctors say. You should also beware of steroid overdose, they warn.