On Tuesday, Malook Singh (65), a native of Sohawa village near Sarhali, was brutally killed at his farmhouse. As his wife and two sons had died many years before, the victim was living alone in the farmhouse. He was the owner of five acres of farmland.

Late Tuesday evening, Malkiat Singh of the same village, the victim’s nephew, became aware of the occurrence. When Malkiat and his friend Satnam Singh arrived, they saw the victim’s arms were bound behind his back. A piece of fabric was jammed into his mouth, and a rag was strangled around his neck. 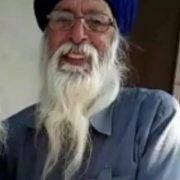 Inspector Navdeep Singh, SHO of the Sarhali police station, said he arrived on the spot quickly and gathered all necessary evidence. According to the facts gathered on the spot, it appeared to be a case of stealing the victim’s property because he had no son.

The victim had two kids, one of whom died shortly after her marriage and the other of whom lives with her in-laws.

He had adopted a kid from a relative, but the boy was returned to him by the family, and there were additional problems over seizing his property, according to the SHO.

Malkiat Singh said that there were several murders since Malook Singh had a well-built physique and struggled desperately to rescue himself, but the attackers were effective in murdering him and leaving the spot.

Before killing Malook Singh, the killers had tea with him. The victim’s weapon was taken from his farmstead by the assailant.

According to the Station House Officer, the police have filed a complaint under Section 302 of the IPC and are conducting further investigation.